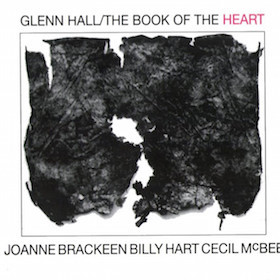 The Book of the Heart

This was my first recording as leader. To do it, I wanted the musicians to feel comfortable in the studio, so I chose Generation Sound in New York and engineer Tony May. The studio was the one used by the fastidious Keith Jarrett for his quartet recordings for Impulse, the piano was the one he used, the piano tuner was Keith’s favorite, and the engineer was experienced, respected and well known to the musicians I chose for the recording: pianist JoAnne Brackeen, drummer Billy Hart, bassist Cecil McBee and my longtime friend, guitarist Joshua Breakstone for whom the session was his recording debut. I chose JoAnne, Billy and Cecil because they are equally confident playing “inside” and “outside” song forms, and I wanted the music to embody the “doorway” between structured and free improvising. In the original liner notes, I said that it was my goal to be “master of the option”, to be able choose structure or freedom as the moment-by-moment process of music making needs. Twenty years later, I still endorse that goal.

If appearances could be trusted, this record would seem to be the work of some up-and-coming New York reedman. It was made in the Big Apple with three of that city’s heaviest sidepersons-pianist Joanne Brackeen, bassist Cecil McBee, and drummer Billy Hart. The music aggressively contemporary, sitting on the edge of free music but clearly conceived by a man whose sense of the jazz tradition is strong.

However, things are not always what they seem. Glen Hall is in fact a 30-ish saxophonist (tenor and soprano) and clarinetist (bass) from Winnipeg. His accompanists will be the record’s drawing card initially; he gives them ample room to themselves ans is rewarded by splendid performances which-as much as his own-are responsible for the record’s success. Hall himself has a plaintively expressive, widely-influenced style that is particularly affecting in the ballads Iris (by Wayne Shorter) and Orchid Opening Downwards (by Hall). The other tunes are by Sonny Rollins, Manfred Schoof (whose For Marianne, by its conventionality, seems a little out of place) and Hall again. Their readings have all the marks of an original mind. It is a striking first record. -Mark Miller-

The record opens with a Hall original, “Orchid Opening Downwards”, a piece of great suspense and beauty, taken at a slow breathing speed, building in a deliberate decentralized way, around solos from Hall and Brackeen and non-directional rhythm, to a lovely McBee bowed solo. Slow waves of crescendoing beauty on a piece rare in its combination of naturalness of composition and instant composition. “Kitab al Qalb”, another Hall original, show some Dolphy roots with Hall playing a talking double time solo backed by Hart and McBee over Brackeen’s free comping-no excess verbiage here, slam bam over and out.

“El Borrado” is the last of the three Hall originals, a piece featuring the leader in asolos role, sqeezing out, in slow motion, forced blown and invertedly blown sax-sounding like overmiked amplifier feedback-it works, it moves. Manfred Schoof’s “For Marianne” ends side one and has guitarist Joshua Breakstone in attendance for this one track. Breakstone has the first solo on this loping almost waltz time piece; he reminds me somewhat of Pat Martino.

Hall also solos on it nicely. Rollins’ “Blue Seven” opens side two and rather than go head on with Sonny’s original power, the theme is boldly stated by bowed bass and bass clarinet in unison: very effective. Everyone free forms behind the solos that drift in and out from Hall, McBee and Brackeen. Great balance, great execution, great freedom. Side two closes with Wayne Shorter’s “Iris”, this free floats but without the focus, strength and interplay that the rest of the record maintains. A recording that must sit well with all invlolved. Did everything just manage to work right-magic in the studio? Or is Hall a master organizer and catalyst? Gutsy music strongly recommended. -Robert Rusch-

The expression “I trust myself” means different things to different people, but mainly means to believe in my creativity. In Glen Hall’s case it means “I am almost unknown, but for my first record I want as sidemen Cecil McBee, Billy Hart and Joanne Brackeen”. It was more than just a brave decision because these three musicians are artists with abilities at so high a point that they could (because of that) overpower the leader. The final result that came out of this record proved that Hall was not just flying in the clouds, but his choice of personnel of the group had been established on the basics of dynamics that he believed were contained in his work.

Another important point is that the Canadian saxophonist followed an autonomous way of production, and independent way, as he believes that the production through the established ways could very soon alienate his artistic creativity.

The first three piece on the record are his compositions. It was a surprise for me how Hall keeps the balance between the flow of sentiments (the melodic line is obviously expressed in his compositions) and the tension (he is moving technically on free jazz ‘”standards”). First class compositions the three of them., but I was a little disappointed because the superb “El Borrado” is only one and a half minutes long.

The group’s performance on the other pieces was excellent and this performance gave new dimensions to the compositions “Blue Seven” by S. Rollins, “Iris” W. Shorter and “For Marianne” by M. Schoof in which the guitarist J. Breakstone is added.

So, with Glen hall we have: a very sensitive composer, an arranger who masters his material, and, first of all, a performer who in his first record made me listen to a revelation. The dangerous point for Hall seems to be his next record, and it is because his first step was so successful that this success makes you expect even more perfection. -Kostas Yiannouloupoulos-