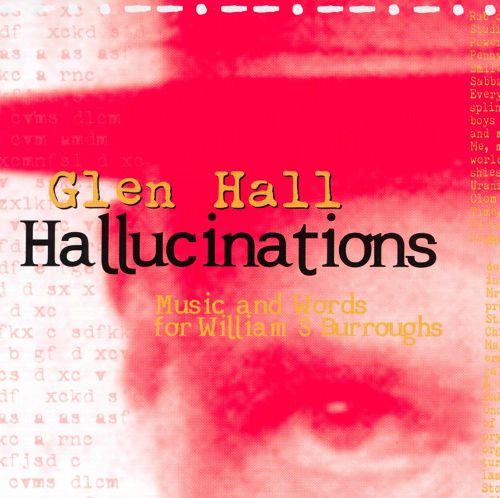 All compositions and arrangements by Glen Hall.

All compositions recorded “live” February 28-March 2, 1997, at the Music Gallery, Toronto except (recorded and mixed at Stimulus/Response)

In 1973, while studying modern Amercian literature, I was asked to produce “a response” to any novel I had been reading. I chose to do a tape collage about “The Market”, a section of William Burroughs’ “Naked Lunch”. That same year, I finished my post-graduate work with my thesis on Burroughs’ cut-up and fold-in techniques of composition. Later, when studying composition, I produced a multimedia piece based on a chapter of ‘”The Wild Boys”.

Twenty years later, while recording with a group I was asked to assemble, Strange Attractors, I used several scenes from Burroughs’ “Nova Express” and “The Wild Boys” to spark spontaneous compositions. I tried unsuccessfully to do a multimedia project with Burroughs himself among others, but the effort, the mistakes and the contacts made during the attempt eventually bore fruit. I had asked trombonist Roswell Rudd if he would participate in the first project. When that didn’t materialize, I persisted and wound up conceiving “Hallucinations”-a multimedia work involving recording rehearsals/performances attended by audiences invited to watch “the process” of creating the work itself.

Film, video, electronic sound projection, spoken word, visual art (statues, found objects) and a ten-piece ensemble with three guitarists, two bassists, two drummers, a percussionist, a vibist, a trombonist and me were all incorporated into a visual/aural work, judging by the audience’s reaction, had quite an impact. The recording, done five months before the novelist’s death, is a good representation of what we did over three days, and serves as an alternative “port of entry” into the hallucinatory world of William S. Burroughs.