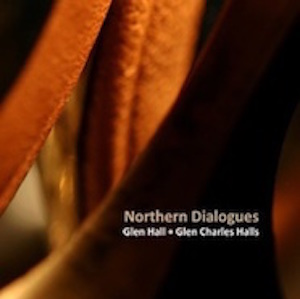 Duo playing is probably the most difficult kind of improvising. Not only must each player depend on only one other to modify or accompany his ideas, but unbridled creativity has to be muted to fit the other musician’s comfort zone. Skilled improvisers aren’t fazed by the challenge; but the instruments they choose are sometimes unusual.

Ever since his arrival in Toronto from Winnipeg 30 years ago, reedist Glen Hall has played with top local and international musicians. A few years ago he began noticing he was being confused with pianist Glen (Charles) Halls, who had moved to the city from Edmonton. Being equally sardonic types, after Halls relocated to Alberta, the two decided to compound the confusion by recording a duo CD, Glen Hall + Glen Charles Halls – Northern Dialogues (Quiet Design Records CD Alas 009 www.quietdesign.us). Still there are as many musical as jocular reasons for doing so. With Hall alternating between breathy bass flute pressure and sprightly tenor saxophone runs, the eight tunes rage from atmospheric and meditative to rhythmic and bluesy. More formalistic than Hall, Halls often appears to be playing a fantasia, mixing legato chords with downward cascading arpeggios. With the low-frequency curvatures of his flute moderato and pointillist to complement the pianist’s comping, it’s Hall’s explosive saxophone tones which make the greatest impression. After adding speedy excitement to the measured and nearly opaque pianism on Astral, with Anything Blues Hall’s flutter-tonguing encourages Halls to display varied keyboard strategies including tremolo strumming.